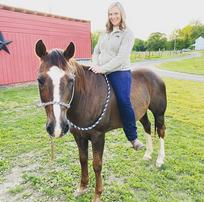 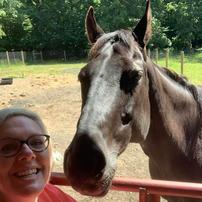 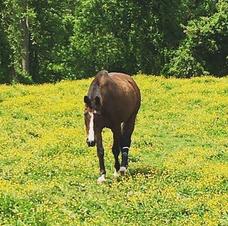 We could not be happier Dan that two of our amazing volunteers, Katie and Sabrina, feel in love and adopted him! He is getting all the love and scratches that he could possibly ask for! 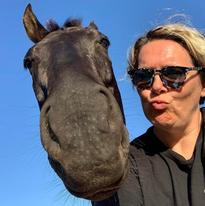 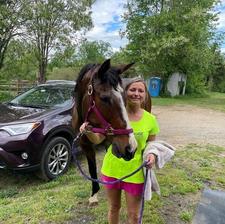 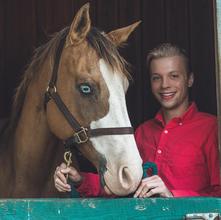 Goose has found his forever home with Katie and her family.He has quickly made friends with Pockets and we couldn't be happier for them!

​Brenda began her journey with FHHR as a volunteer! The moment she saw Jack it was love at first sight and she knew she had to adopt him.

“FHHR made a difference in Jack’s life by rescuing him so he could save me when I adopted him. Freedom Hill cares for their horses and make the process easy for anyone who wants to give a horse a happy life. Save two lives - yours and a horse - and adopt ”

​“Adopting Honey from Freedom Hill was a very fulfilling experience to say the least. Coming into the horse ownership world for the first time was an endeavor I could not have done without the guidance and knowledge of FHHR. As a teenager with a love for horses, I had no idea what I was getting myself into. Freedom Hill guided me every step of the way. They made recommendations and provided me with resources to gain the knowledge and ability to become the horse owner I always dreamt of. With the recommendation of beginning with fostering, it was only about a year before Freedom Hill and I made the decision to move forward with adoption. I was nervous about this transition as Honey was quite popular amongst potential adopters; but what a seamless process! I am very thankful I made the decision in choosing Freedom Hill. I gained a best friend and the best companion a man can ask for :)” 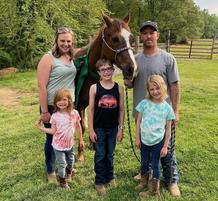 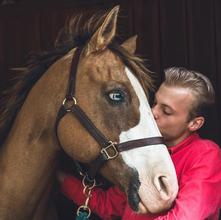 “Our adoption experience with Freedom Hill has been wonderful! Freedom Hill is more than just a business, it’s family! They made my husband and I feel right at home. We are forever grateful for our wonderful boy Rusty! (Gabe) ”

“Adopting Goldie through FHHR was one of the best decisions I have made as a horse owner! The entire group at FHHR are wonderful people and the care they give to the horses in need is nothing short of exceptional. I am so happy to have found Goldie and FHHR, we couldn’t be a better fit!”

​Sara says her heart is full, she adores this guy and it was the easiest pasture transition ever. Quater fit right in, made new friends and is very happy in his new home. We love to hear that! It's what it's all about! Quater was a collaboration rescue, rehab retrain and rehome effort between Freedom Hill and Southern Maryland Equine Miracles.

“Adopting from FHHR was absolutely terrifying. The thought of having to be the best candidate out of many, and what I would need to do, or the impression I would need to make to the rescue made my nerves go crazy and heart pound. But the day I arrived ALL of that went away. From the warm welcome as soon as I arrived, to the moment my eyes saw Kirby. For the first time, I felt accepted. I was able to ask questions, be myself, and was welcome to be a part of the FHHR family from the very beginning. The process was simple and laid out in a way I could understand. They were prompt about staying in touch with me and where I was in the process. The genuine kindness and care for their horses showed by how they treated me. I will never forget the day I broke down in tears because they chose me to adopt Kirby. Because of this amazing experience, when I was ready to add another forever horse to my family, I knew where I needed to go. That is how I became Kirby and Miss-E’s human mommy!
Both Miss-E and Kirby are flourishing in their new home with me. They are loved by not only me, but my children as well! They are treated like royalty and I believe are starting to think that they actually are. I thank God every day for FHHR for bringing us into each others lives!”

“I know mom, I know. You say the same thing every weekend!”

“I just want you to be safe, Ella. The horses are very big, and you’re very small.”

We began putting hay out for Blue on one side, Ellie and Apple on the other. Then we began mucking on Blue’s side first. He’d always been gentle and personable, so Ella walked toward him as usual, intending to give him a pat. He backed away and snorted. She tried again, and again he backed away, this time throwing his massive head into the air with fearful eyes. I didn’t know what was wrong, but my mom-worry was kicking in to high gear, so I told Ella to back away, and give him plenty of room while we mucked. As we worked, I kept turning to make sure she wasn’t too close to Blue – and I was confused. This old man was one of the sweetest horses at the rescue, why was he acting this way? Ella chatted continuously as we pushed the wheelbarrow around and mucked with the red rakes. I was turned away from her, working at a stubbornly frozen pile of manure when I realized she had gone silent. Then came a loud snort from Blue. I gripped my rake and spun around, ready to rush to the rescue, but stopped short, holding my breath. Ella had stretched those polka-dotted gloves straight out in front of her and was standing perfectly still, talking to Blue in a quiet voice that barely reached my ears. He stood with his big head outstretched, ears back, sniffing at her gloves. That was it – he wasn’t sure about those gloves. As she continued to whisper to him, her body perfectly still, he inched closer and closer. I felt my worry, and my heart, melt. As my small girl waited, that giant horse walked up and put his velvety nose right in the palms of her hands. She gently stroked his muzzle, whispering to him the whole time. Then she slowly, ever so slowly, stepped forward and rested her forehead against his nose.

Finally, she looked toward me with a smile even bigger than mine and said, “See, mom, you don’t have to be nervous. He’s the one who was nervous! He’s so big, but he was afraid of my gloves!” 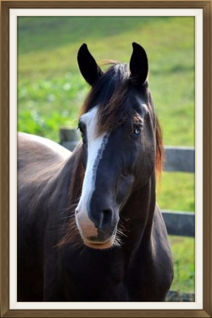 responsibility of owning a horse. To prove to them I was ready for a horse, I worked every day after school at Dowell Farm to help pay for Lance's board. I was at the barn between 5 - 7 days a week doing various barn chores. After that year my parents finally signed the adoption papers, and Lance was officially mine! I continued to work board off throughout high school. Lance helped me with a lot of stuff. He was my therapist when I failed a test or when girls weren't nice to me at school. I would go for a ride or go and groom him when I needed to get things off of my mind. It always seemed to help.
Today, I do basic horsemanship with him. I've taught him flying lead changes, how to frame-up, how to bow, how to be a good trail horse on the trails, and how to be an English Pleasure horse in the show ring. I've started teaching him to go completely bridle-less, and it is a work in progress. I've done pony rides with him and kids usually love him. Well, once they get over the fact that he's 16 hands tall! I can trust beginners on him, and I never have to worry about him putting a hoof out of line. I am so glad that I get to call Lance mine! 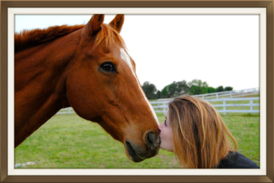 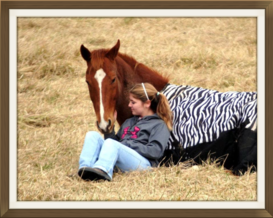 Not long after my husband and I began volunteering at FHHR, we were given the opportunity to take the Saturday morning feed shift at the small barn at Hampton. We were excited because, though I had been working Monday morning shift for some time, our goal had always been to volunteer as a family, along with our two girls. Saturday mornings meant that Ella, age 9, and Elise, age 6, wouldn’t be in school and could come spend time with the horses, do a little hard work, and get good and dirty, as all kids should. Though I was often anxious about one of them getting hurt, I swallowed it down because I knew that it would be good for them.

One Saturday in the late Fall, my husband and younger daughter were ill, so just Ella and I headed to the small barn. While I was still a little uncertain around the horses without another adult there, I thought it would be a great opportunity to spend some one-on-one time with my girl – we could gain confidence together. The morning was cold, but the sun was bright and beginning to soften the frost on the grass. Ella was wearing new gloves, black ones with bright white polka-dots that seemed really vivid in the clear light. Before we began work I went through our little safety routine: “Always be aware of where the horses are; be careful not to spook them with loud noises or sudden movements; only work on the side where I’m working so you’re not alone….”

Big Brave Blue
This story was submitted by FHHR volunteer, Renee Reid, in March 2015.  Although we usually feature FHHR alumni on this page, the story was so heart-warming, that we had to share it here, too!

UPDATE:  This story was featured in the Winter 2013 Spotlight newsletter.  In mid-January 2015, Lance developed a large bump on his side. Shelby and her family were willing to give Lance whatever treatment he needed to be well again, but Lance lost his fight on February 16th. Lance will be missed and remembered by many of us at FHHR.

​When I first looked at Lance, he had been with the rescue for four years. He was lame for three of those four years from a suspected track injury. He has had a limitation of no jumping and no excessive riding. I do actually believe he was advertised as a
companion horse for a while because the vet didn't expect him to be sound enough for any moderate riding. I had a very hard time working with him. He was the first horse I had actually trained on my own. It wasn't easy, that's for sure! And I used a lot of what Crandell's Horse Works had taught me. I rode with Joe two summers and learned SO much. Lance and I wouldn't be where we are today without everything Joe and Donna taught me. Lance had no professional training. He had a lot of bad track
habits and at times it was very discouraging. The first year I leased Lance from Judy Leavitt of Dowell Farm- bless her heart for everything she did for Lance and me.
My parents were not entirely sure they wanted to commit to such a large

​​​We keep in touch with adoptive families as much as possible and love to hear stories about our horses in their new lives.

Be sure to sign-up to receive our monthly newsletter!